We want to welcome you to our “Parish and Community” page. We hope you will refer to this page frequently to read the articles and events going on in our faith community. We encourage you to contribute, whether it be a faith story you would like to share, an event going on in the community, maybe a question you have about our faith. We strongly encourage our young people to share their stories, their input as to how we can be a stronger, more vibrant faith community. Remember, you need to send this through our e-mail at icmaplewood@gmail.com.

May we continue to pray for and with each other. May we be willing to give of our time and talents to bring the Good News of Christ to those we meet, so that we will truly be alive in Christ. 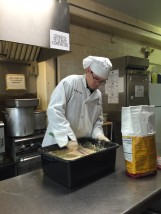 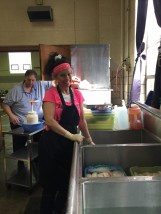 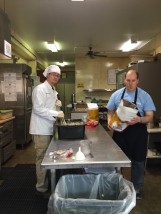 In case you missed the Sweatheart Dance, here is a video link to show how much fun it was! http://video214.com/play/hDhbqyTkaF0f9QVYMoq2Ug/s/dark

SAINTS AND FEAST DAYS IN MARCH

March 3:  St. Katharine Drexell (1858-1955)
She was from a wealthy and well-known Philadelphia family.  Her parents made large donations to charity.  On a trip to the state of Washington, she was shocked by the poverty she saw on Indian reservations.  Later, while visiting Rome, the family spoke to Pope Leon XIII.  Katharine begged him to send missionaries to help neglected Native American communities.  To her shock, he said, “My child, why don’t you become a missionary yourself?”

Eventually she did just that.  In 1891, with 13 other women, she founded the Sisters of the Blessed Sacrament.  She first opened a boarding school for Pueblo Indian students in Santa Fe, New Mexico.  In time they founded missions for Indians in 16 states.  They began a secondary school for African American students in New Orleans.  This school was the forerunner of Xavier University.  After the First World War they founded schools in Chicago, Boston, and New York City.

March 8:  St. John of God (1495-1550).
He served in the army and then became a shepherd.  It wasn’t until he was 40 that he decided to turn his life around.  He founded a hospital where he could care for the sick and homeless.  He laid the foundation for what would become known as the Brothers Hospitalers.  He was canonized in 1690 and, in 1886, Pope Leon XIII named him patron of hospitals and the sick.

Ladies Auxiliary #903 with Elvis (Steve Davis) at the Spaghetti Supper

Congratulations to parishioner, Nick Gantz, who received his Eagle Badge on December 20th at Immaculate Conception. 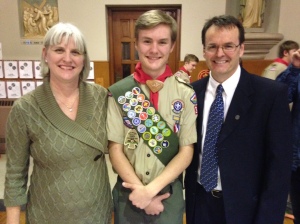 Parishioner Nick Gantz with his mom and dad after the ceremony.

Nick saying the Eagle promise with other Eagle Scouts in attendance.

Nick getting his Eagle pin.

Little Flower School made a wonderful donation of canned goods to our SVDP Pantry on November 11th. 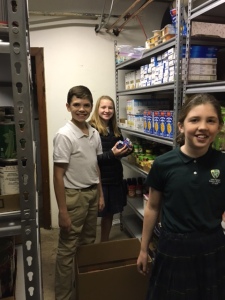 Little Flower students help to stock the food pantry with their donations.

Sandra explaining to the students how the pantry works.

WHISPERS OF THE HEART

Today I thank you, Lord

For all the joys You bring

For rainbows in the sky

For flowers in the spring

For warmth of gentle rain

That falls from up above

For wealth of little prayers

That fill my need for love

For friends who fail me not

When I am in some need

When my despair is plain to see

Are there my soul to feed

You are so kind and gentle, Lord

Forgive the faults in me

And keep me ever close to You

Until I come to Thee.

Congratulations to our IC Team at the Friends of the Poor Walk this past Saturday, September 26th.  They raised $1632.00 for our Society of St. Vincent de Paul Food Pantry and assistance programs.

Ellie Lunte and Renee Ellegood, both seniors at Cor Jesu Academy, have been named this year’s Watlow Scholars, an award that provides each student with a $7500 scholarship toward their 2015-16 high school tuition and a paid internship at Watlow the summer after graduation from Cor Jesu.  The Watlow Scholars program was established at Cor Jesu in 2013 to promote awareness and interest among young women about the field of engineering.

“The continuing shortage of women professional engineers creates a tremendous career opportunity for our students,” said Sr. Barbara Thomas, ASCJ, President of Cor Jesu Academy.  “Ellie and Renee have both demonstrated a strong interest in engineering and a willingness to give back to Cor Jesu’s engineering program in the future.  This award gives them the support and encouragement they need to continue working toward a STEM-related career. We are very proud of them.”

We are extremely thankful and grateful to Watlow for their continued financial support of this important program,” Sr. Barbara added.  “Three of our previous Watlow Scholars have gone on to major in engineering in college.  This program is showing meaningful results.”

“Watpw’s relationship with Cor Jesu started with the goal of expanding the potential for Cor Jesu girls to choose engineering as a career,” says Melissa Lanham, Senior Engineer at Watlow.  “In order to achieve that goal, we realized how important it was for the students to be mentored, to learn by doing and to be exposed to other women engineers and various engineering careers.  We have hosted the Summer Engineering Experience the last two summers and provided a total of six scholarships over the past three academic years to Cor Jesu students along with internships and job shadowing opportunities at our company.  The word JOY comes to mind when I know I can help pass the word along to Cor Jesu students about what engineering is about, giving encouragement and insight.”

The Watlow Scholars program is part of Cor Jesu Academy’s Corporate Partners Initiative, which was launched in 2013 to take learning outside the confines of the classroom and expand the meaning and scope of college preparatory.  The Corporate Partners Initiative also includes a Summer Engineering Experience, internship opportunities, academic program support and professional job shadowing for Cor Jesu students.

Watlow designs and manufactures industrial heaters, temperature sensors, controllers and supporting software as well as assemblies – all of the components of a thermal system. The company partners with its customers to optimize thermal performance, decrease design time and improve efficiency of their products and applications.

Cor Jesu Academy is a leading Catholic college-preparatory high school for young women founded in 1956 and operated by the Apostles of the Sacred Heart of Jesus.  Students from 61 zip codes across the St. Louis metropolitan area currently attend the school and come from 106 different Catholic, public, private and home schooling learning environments.  For more information, visit http://www.corjesu.org.

We certainly can use all the help we can get as we walk through life. God’s Word is the place we should first turn to. Sometimes we may think about picking up our Bible, but we just don’t know where to find what we need. Here is a little help.

When people disappoint you, see Psalm 27.

When you have sinned, see Psalm 51.

When you are in danger, see Psalm 91.

When you are lonely and fearful, see Psalm 23.

When you grow bitter and critical, see 1 Corinthians 13.

When the world seems bigger than God, see Psalm 90.

If you are depressed, see Psalm 27.

For how to get along with others, see Romans 12.

If you are losing confidence on people, see 1 Corinthians 13.

A young man was getting ready to graduate from college.  For many months he had admired a beautiful sports car and, knowing his father could well afford it, told his father that was all he wanted.

On the morning of his graduation, his father called him into his private study.  His father told him how proud he was to have such a fine son and told him how much he loved him.  He handed his son a beautifully wrapped gift box.

Curious and somewhat disappointed, the young man opened the box and found a leather-bound Bible, with his name embossed in gold.  Angry, he raised his voice to his father and said, “with all your money, you give me a Bible?”  and stormed out of the house.

Years passed and the young man was very successful in business.  He had a beautiful home and a wonderful family but his father was very old and thought he should go to him.  But then he received a telegram telling him his father had passed away and willed all of his possessions to his son.

When he arrived at his father’s house, a feeling of sadness and regret filled his heart.  He found the still gift-wrapped Bible, just as he had left it years ago.  With tears, he opened the Bible and began to turn the pages.  His father had underlined a verse, Matthew 7:11, “And if you being evil, know how to give good things to your children, how much more will your heavenly Father give to those who ask Him.”

As he read the words, a car key dropped from the back of the Bible.  It had a tag with the dealer’s name, the same dealer who had the sports car he had desired.  On the top was the date of his graduation the words PAID IN FULL.  How many times do we miss God’s blessings because we can’t see past our own desires.

Sometimes my cross is hard to bear

for there is darkness everywhere,

and troubles pile around my door

The morning light seems far away,

I try to pray, but words won’t come.

But then the sun begins to rise

and hope is born within my eyes.

A rainbow forms among my tears

for faith is stronger than my fears.